When we arrived at school today, we had a very special visitor! It was an elf that had come to visit us from the North Pole. He was holding a letter, which we shared as a class and we found out his name was Sparkles!

Sparkles has been so excited to meet all of us and share our learning. We have already enjoyed sharing our favourite stories with him and telling him all about the letters we have been writing to Father Christmas as a class.

We will keep you updated with all of the exciting things Sparkles gets up to in Reception Class on this page. If you would like to view the letter we received from Sparkles today, please click on the PDF link below!

Over night, Sparkles had found some green and red glitter, and sprinkled it everywhere! He then used a paintbrush to write some WordTime words into the glitter. We had lots of fun reading the words.

After that, we were very excited to clean up the sparkly glitter! We really enjoyed tidying and looking after Sparkles.

Today we found a new post box, which Sparkles had brought for us! Sparkles was hiding inside the post box, so were very excited to put him back by his elf door.

We've had lots of fun today writing Christmas cards and using stamps on envelopes. We then posted them into our post box!

When we came into school after the weekend, we spotted Sparkles reading a story on the carpet! He was sharing the story The Smartest Giant in Town, by Julia Donaldson and was reading it to lots of dinosaurs.

We then had lots of fun retelling this story to each other. We also shared some of our other favourite stories.

Sparkles with the letter we received on Day 1! 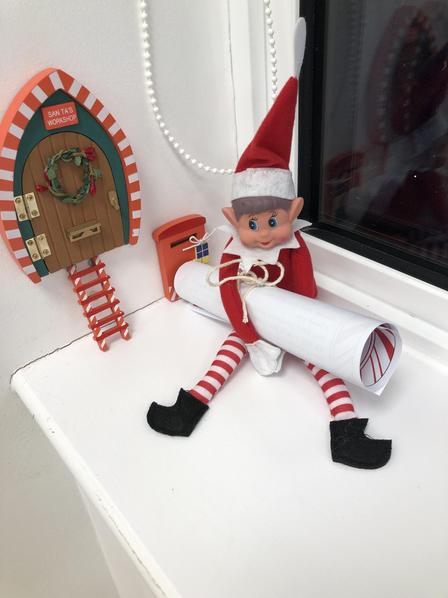 We found WordTime words written onto red and green glitter on Day 2. 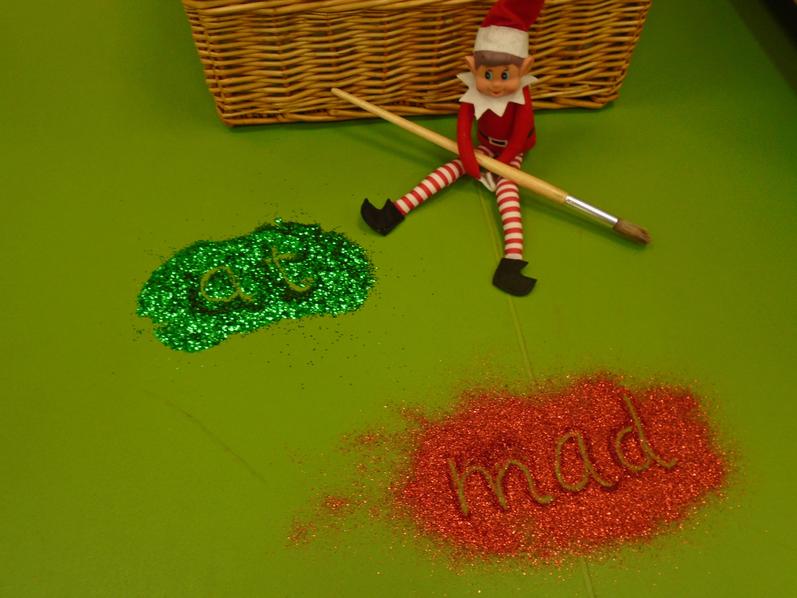 We found Sparkles in the post box, with all of the Christmas letters and cards on Day 3! 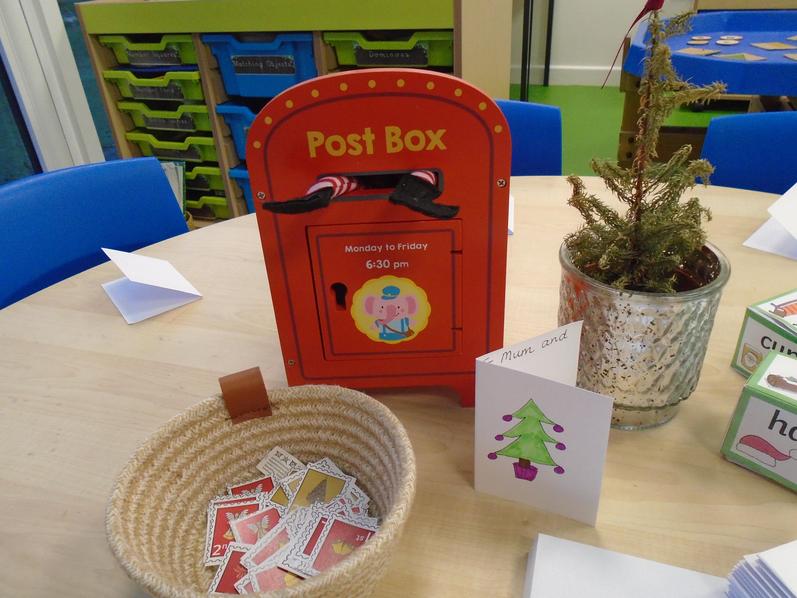 On Day 4, we found Sparkles reading a story to the dinosaurs! 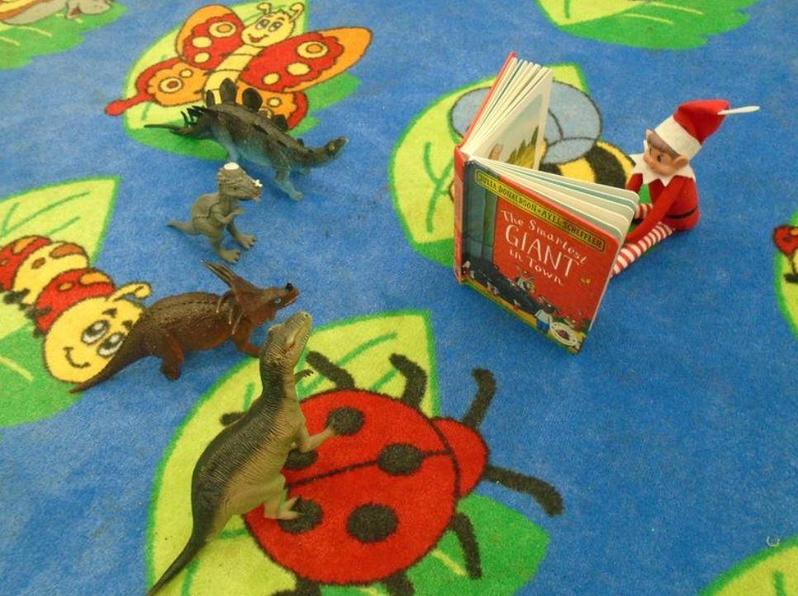 Today when we got to school, we found Sparkles with some muddled up numbers! Sparkles had set us the challenge of putting the numbers back into order.

We had lots of fun working together and putting the numbers 0 to 9 into order. We started with 0 and ended with 9!

Sparkles brought us a new letter! He said he was really enjoying spending time with us in Reception Class.

He has also enjoyed listening to us retell and share our favourite stories with him too! He particularly enjoyed "There's an Elf in Your Book!", by Tom Fletcher.

Sparkles used Lego to make a Christmas tree! He used green and red bricks to build it.

Sparkles found out our sparkly play dough! He rolled the play dough to make small balls, then used them to make snowballs.

This then inspired us to create our own snowy scenes using the play dough too!

We found Sparkles with lots of muddled up numbers on Day 5! 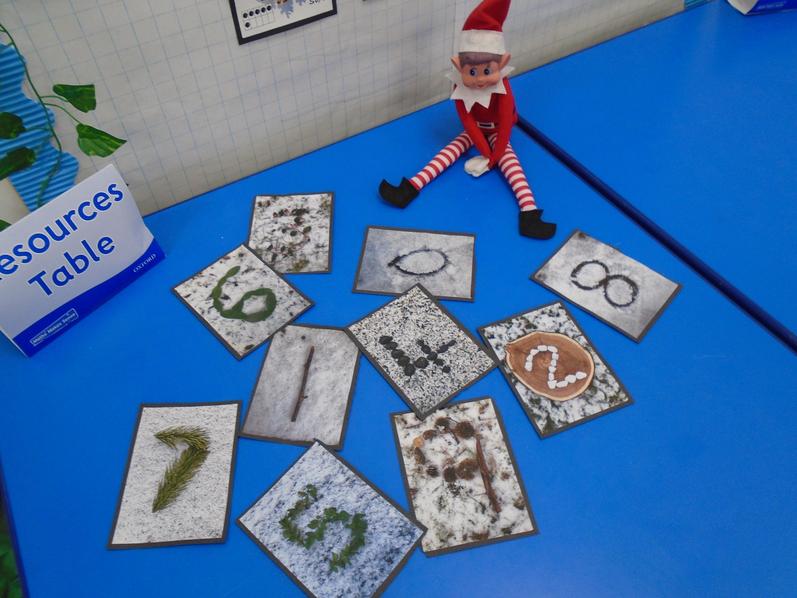 On Day 6, Sparkles brought us a new letter to read as a class! 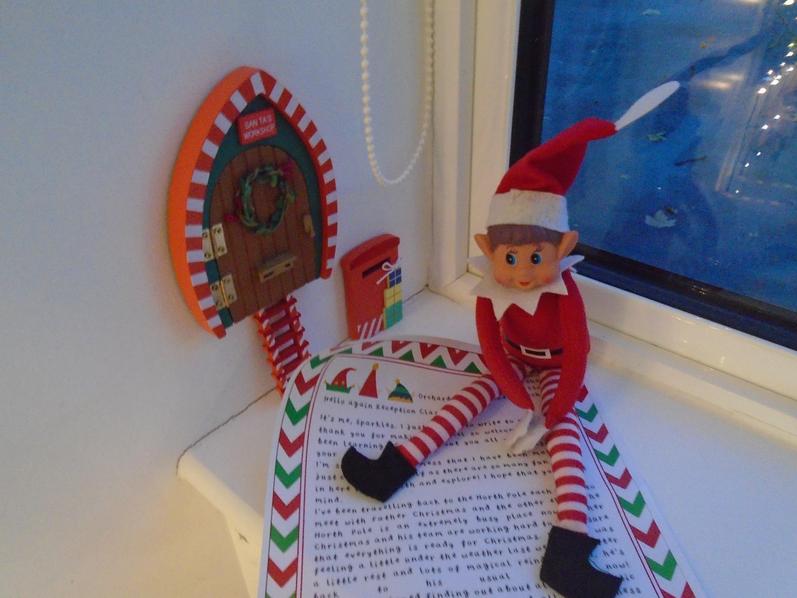 Sparkles used Lego to make a Christmas tree on Day 7! 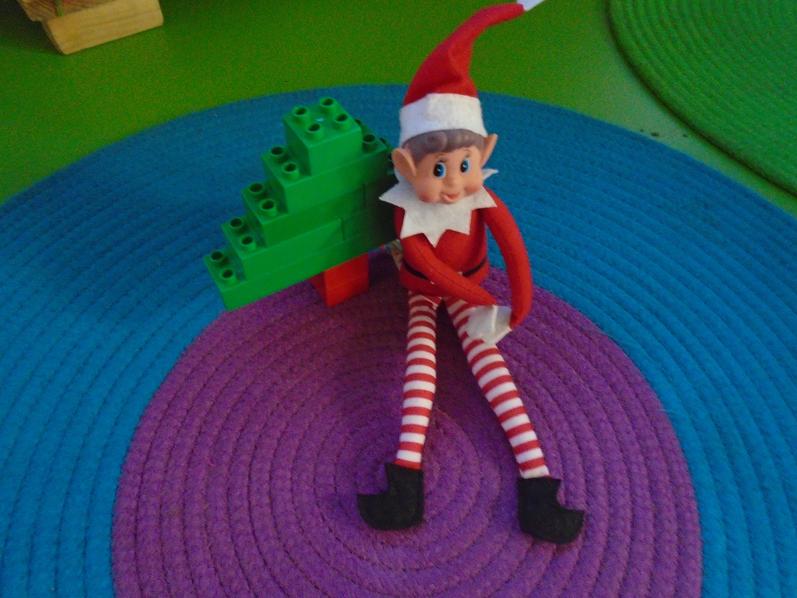 On Day 8, Sparkles used our play dough to make snowballs! 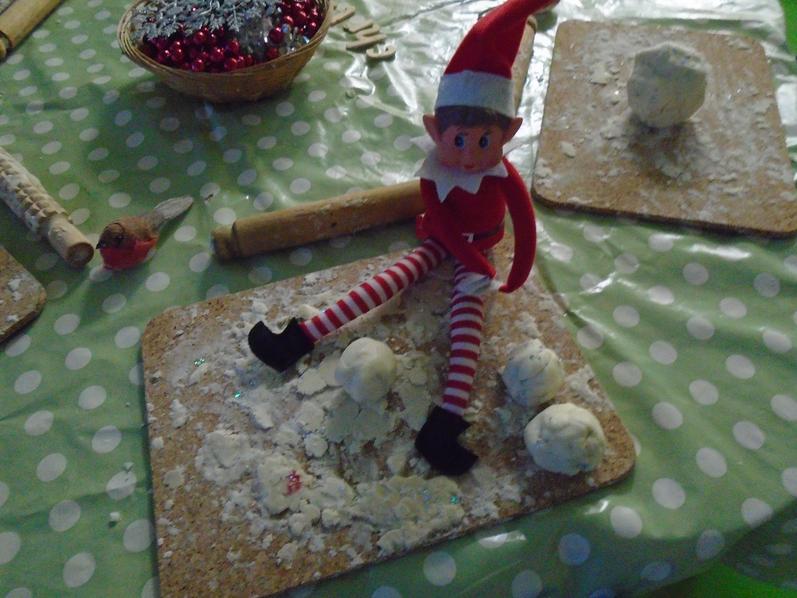 We found Sparkles with some pinecone Christmas trees and candy cane pipe cleaners. He had been very busy making them over the weekend.

This then inspired us to create our own Christmas trees and candy canes in DT this today!

Sparkles had used red paint to leave us a message on Day 10! He wanted to wish us all a Merry Christmas.

We found Sparkles sitting on a parcel! He had used green tissue paper to wrap it up, then had put a gold star on top.

The gold star said, "Love from Sparkles". We opened up the parcel and found a very special storybook, The Jolly Christmas Postman, by Janet and Allan Ahlberg. We enjoyed sharing this story as a class and then used it as our Super Six Shared Reading book this week.

We came in to school to find a very special letter from Sparkles! He said he was very proud of all of the work we had been doing at school this year. He also explained how today would be his last day with us and wished us all a lovely Christmas holiday.

Have a wonderful Christmas holiday!

On Day 9, we found some crafts that Sparkles had made! 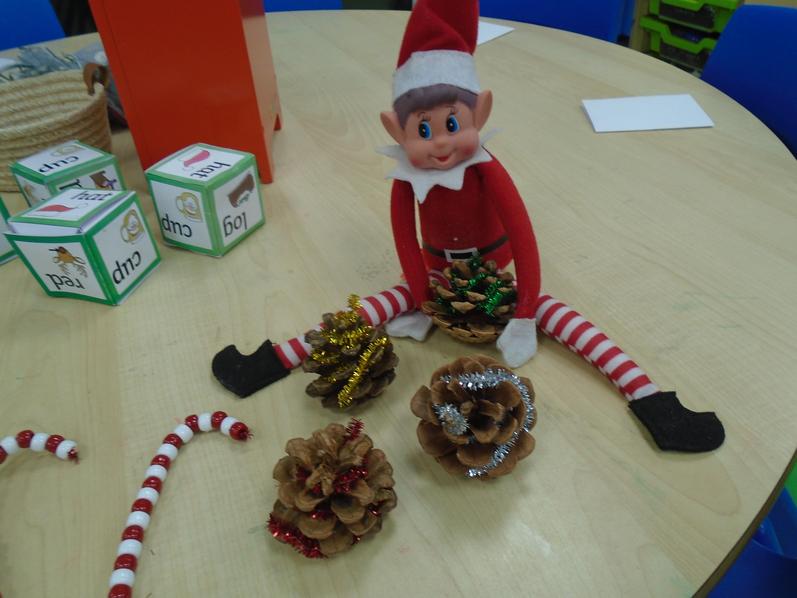 We found a message from Sparkles on Day 10! 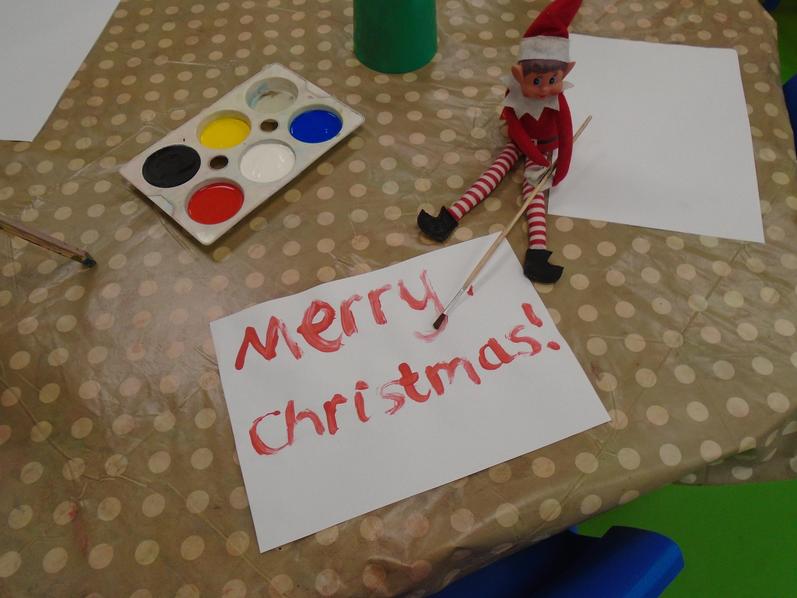 Sparkles left us a very special present on Day 11! 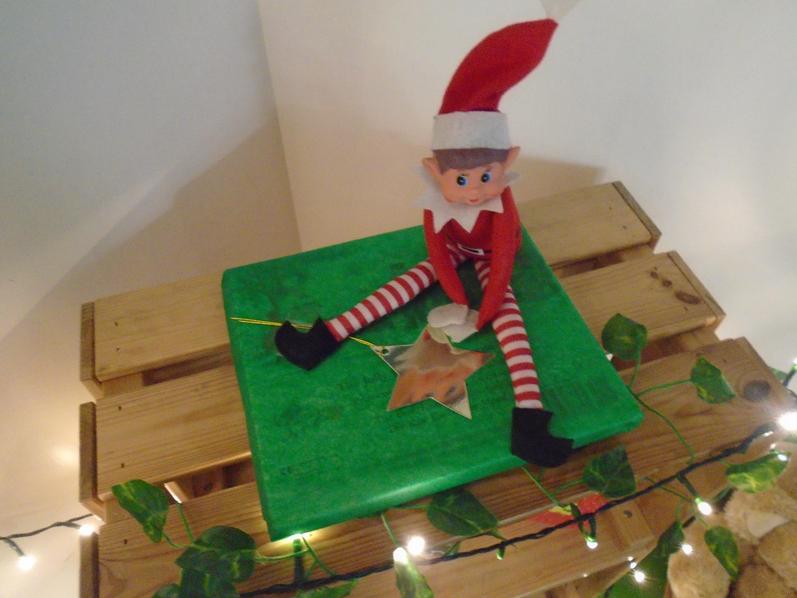 On Day 12, our last day with Sparkles, he brought us a letter! 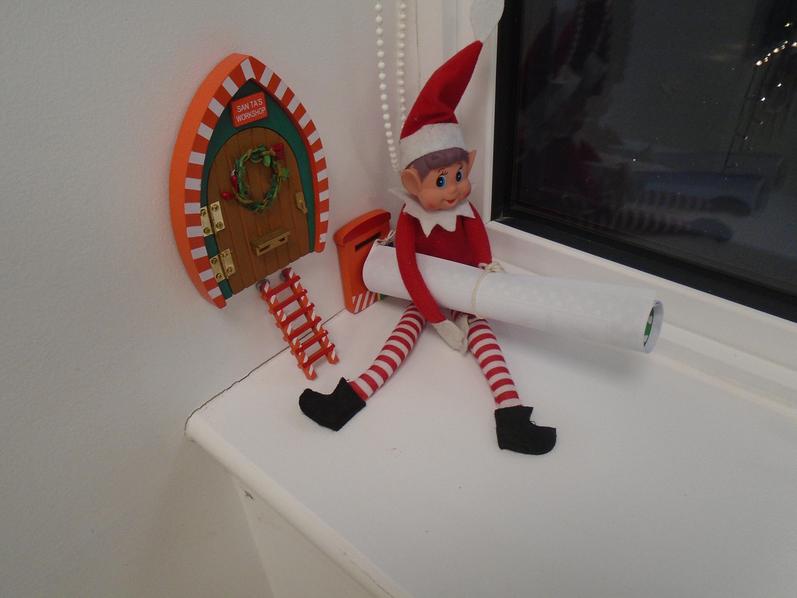